Our new album Apparitions was released on April 12th 2019

Album Cover
Apparitions: (n) false or strange appearances, such as ghosts, illusions echoes, and myths.
This is the theme of our album and it describes how the album relates to the musical traditions of the past; breathtaking instrumentals break boundaries but sound strangely familiar. Songs tell old tales of a distorted new world. Through the lens of our new music, we view folk as a lingering phantom of forgotten ways that still haunts our modern thinking...
"This is an absolute jewel of an album, pushing and growing the classic folk duo form" Marc Higgins - FATEA Magazine
"These two intrepid musicians have thrown everything into this album and the result is fantastic" Tom Newell - Songlines Magazine June 19
"Apparitions is the kind of album that could change the very meaning of contemporary folk music" Thomas Blake - Folk Radio UK
"skilful arrangements…pull out bits of emotion, add in sounds from elsewhere, knead them and let them ferment" Iavn Emke - Living Tradition
"taking the folk scene to new places and beyond with a boldness" Mike Ainscoe - Stirrings Magazine
"there is a freshness, vitality, flair, and invention rarely seen in many of today's guitar and fiddle duos" - Nygel Packett - Folk London Magazine
"Apparitions is a moment of Folk glory" Ian Hall - Liverpool Sound & Vision
"inventive - grounded with a folk sensibility" - Colin Bailey RnR Magazine
"Absolutely top hole. A very fine album indeed" Frank Hennessy - Celtic Heartbeat BBC Wales
"A very, very interesting and exciting album" Mike Brocken - Folkscene BBC Radio Merseyside

We have been performing together for nearly eight years. In that time our music has got more ambitious. Our last album was recorded three years ago, and now we want to go to exciting new places, and break through to bigger audiences with something different.

Come with us and help us bring our bold new creations to the UK folk scene and beyond. We hope this album will surprise and entertain you, and maybe even leave you questioning whether it was all just an illusion...
You can buy our current albums from us by post here

The current album - We Happy Few 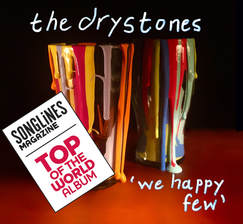 The current album was officially released on 30th June 2017 (available on iTunes etc), you can get copies from us by mail or see us at any of our gigs. You can listen to the album on SoundClound. Downloads are available from all the usual sources

We are really proud of this CD and are ​glad to see that the critics agree!
Songlines - "An album that is on a par with the best of the emerging generation in folk music"
Bright Young Folk - "A fine selection of traditional songs and tunes are interspersed with some excellent original tracks in this really enjoyable album"
Sunday Express - "Music with attack, precision and a genuine sense of joie de vivre​"
Living Tradition - "Lovely stuff played with power, verve and pizzazz"​
fRoots - "Displaying inventiveness, vivacity, dynamism and a keen awareness"
Stirrings - "A very impressive record. There is no shortage of "Nyah" on this CD
Liverpool Sound and Vision - "An album of good grace and friendship, of high performance and unquenchable thirst"
Folking.com - "Admit it, you're interested now"
​Folkwords.com - "Tradition at its best, innovation at its finest"
This is a taster of one of the songs  in the new album recorded by Songs from the Shed at Larmer Tree Festival 2016

Our first album - A Tale Of Sound And Fury 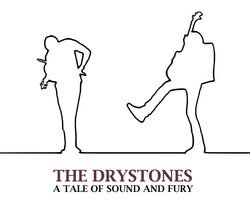 This was our first full album and was a big step on from our first recording. Our music developed a lot. We finally got together with Will Lang and Tom Wright in Sheffield in September of 2014 to record "A Tale of Sound and Fury".

This album used a lot more studio techniques than our first EP adventure, and has some extra contributions from Will and Tom. We are really pleased with the final result.

We were only able to do this with the support of people who had faith in us and bought the album in advance or pledged through our pledge music campaign. We also had support from the Wells Rotary Club and from Mark Walton landlord of the Queen Victoria in Priddy.

Contact us if you are interested in purchasing a copy (£11 including UK postage) or see us at any of our gigs.

Reviews of "A Tale of Sound and Fury":
Fatea "The Drystones deliver exceptional 2nd album"
Bright Young Folk "Back and better than ever"
Living Tradition "How can they be so good when they’re not even in their twenties"
Folk Radio "A thrilling, must hear collection"

You can listen to the album on SoundClound

We enjoyed the process of  the Pledge Music campaign and would recommend them to anyone thinking of a similar project. We liked making the video too, so we leave this here for you to enjoy!

Our first EP - The Album (Or What You Will) 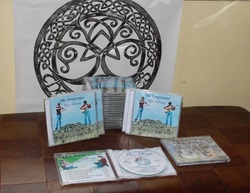 In 2012 we locked ourselves in a darkened room in Glastonbury, and committed six tracks to a recording. Although really an EP we called the result "The Album (Or What You Will)". It was full of youthful exuberance but it was well received and encouraged us to greater heights!
It is still available on iTunes and other MP3 vendors. If you have a copy of this they are quite rare now, and we are unlikely to print them again, so treasure them!

It was reviewed in Bright Young Folk  and "The Album" was selected as Album of the Week  for week commencing 26th Nov 12 by Emma Britton for BBC Somerset "Love these boys!"